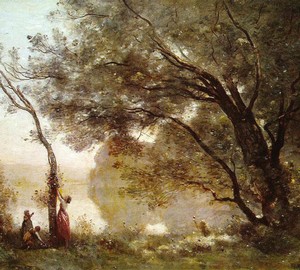 Camille Corot’s landscape painting (1796-1875) became the forerunner of the “new art” declared by the Impressionists. In his own works, the painter paid much attention to the transmission of light and air. Some works were written from nature, which made it possible to more accurately convey the complex play of light, and some were “composed” by him or reproduced from memory.

“Remembering Mortfontaine” – the most popular painting written from memory. As its name indicates, the bewitching romantic landscape, animated by female and childish figures, is inspired by pleasant memoirs about one of the beautiful days spent in such a colorful place. This is almost a monochrome landscape with a quiet expanse of water, the contours of the implicit shore lurking in the fog and a captivatingly reverent light-air environment, immersing the whole landscape in a light golden haze."