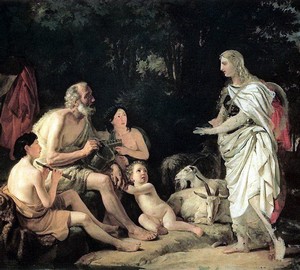 One of Bryullov’s most notable works on a religious plot is the painting “Herminia among the Shepherds”. The painting was inspired by the poem “Liberated Jerusalem” by the Italian poet Torquato Tasso (16th century).

A rural secluded life away from shocks as a plot for a canvas was very popular among painters, especially in the Baroque era. The young Herminia, the daughter of the Saracen king, in love with a Christian knight, went to find her lover in the war, fearing for his life. Dressed in armor, she suddenly heard the wonderful sounds of the pipe – the old shepherd was playing. Following the wondrous sounds, Herminia came to an old hut, where she saw a family of shepherds weaving baskets. Noticing the lady in military uniform, the old shepherd began to convince her of the beauty of a secluded, measured, and most importantly, peaceful life.

The traditional plot with its classic elements is nevertheless distinguished by the stylistic innovations that Bryullov brought to his canvas. All images are characterized by an interpretation close to reality – we see the lively surprise of the shepherds, which is read both in faces and in poses. Only the figure of Herminia can be reproached for some academic and statuary – the folds of clothes have a pronounced sculptural interpretation.

Despite all the harmoniousness of the picture, it was never finished by the painter – the keen nature of the master drove him forward, forcing him to start new subjects."