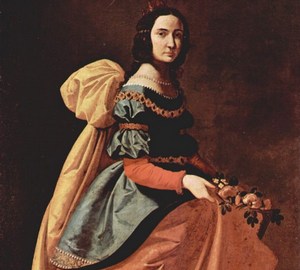 In portraits of Zurbaran, the models illuminated from above are usually depicted in full growth, presented in measured poses, dressed in robes made of languid fabrics. So with restrained, but expressive gestures, seemingly narrating about their deeds, the raging inner passions read in their faces contrast.

Many images of the master are deprived of religiosity, as, for example, in the painting “Saint Casilda”. Her feat — hidden from her father, the Moorish ruler who professed Islam and helping captive Christians — is remembered by her resolute swarthy face with a tough, serious look. The rest of the portrait shows an authoritative lady, proud, not without grace, in an expensive, dressed-up dress. But the saint holds flowers in her hands – a sign of wonderful salvation from her father’s punishment. Zurbaran, a beautiful colorist, breathtakingly accurately conveyed the radiance of silk, pearls, airiness of the background. The artist applied rich green and purple tones.

Despite the Domostroevsky way of life in Spain of the 15th century, ladies’ self-awareness grew: among them appeared scientists, politicians, conquistadors. The image of Casilda is typical among a number of others covered in romance."