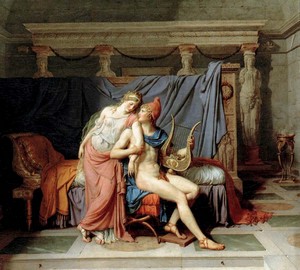 The painting, dedicated to the heroes of the ancient Greek epic Paris and Lena, was ordered from David by Count d’Artois, a lover of frivolous scenes.

In fairness, it should be noted that the picture is not particularly shameless, though Paris, endowed with the beauty of Aphrodite herself, is naked, while Lena is dressed in spacious clothes. An embarrassing moderate blush froze on the cheeks of both, which gives the picture a charm and charm.

For the rest, the composition is presented as a harmonious mixture of ancient representations and French reality – Greek heroes side by side with a situation reminiscent of a Parisian boudoir, classic vestments with a French sofa.

An attentive viewer will discern in the work an abyss of cunning and unambiguous hints – here is the virgin blush of the dressed Lena, and here the straightened bed and naked Paris.

Certainly, David’s majestic paintings are yet to come, but “The Love of Paris and Helen” has such an inimitable charm, bliss and some frank flair that it is simply unrealistic to pass by this work. That way the picture opens the anacreontic line of plots of David’s paintings."