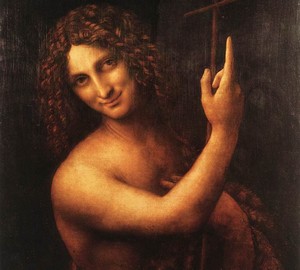 “John the Baptist” – one of the most recognizable masterpieces of da Vinci of his late period of creativity.

Art historians agree that in this picture the majestic painter brought the sfumato technique he discovered to perfection. He placed the figure of John da Vinci on a dark dull background, so as to focus the viewer only on the hero, and with the help of sphumato, the master achieved a unique enveloping effect.

The model for the picture was the recognizable student of Leonardo – Salai, who was with the master for more than 20 years, and historians still argue about the nature of their relationship.

The painting itself combines both classical symbolism and innovative elements. The hero has a effeminate appearance and is dressed in woolen clothes, the canonical image of him with long hair and a finger pointing to the sky is also canonical. In general, a raised finger was the leitmotif in almost all the works of the great Italian.

The figure of John and his right hand, placed in their own diagonals, resemble the encrypted sign of the cross. The reed cross itself can hardly be guessed in the picture. The hero is not soulless and strict – a slight grin plays on his faces, and his eyes seem lively and fixed, and besides, he is indescribably young, which did not fit into modern ideas about the famous Saint. The picture caused bewilderment even among fans of Leonardo.

If we recall the earlier works of the creator, where the characters are always placed in a colorful background, where nature stands, then “John the Baptist” looks more than original in this regard, which not only indicates the creative search for the creator, but also a gradual change in the aesthetics of painting Renaissance. Some researchers believe that in this work, da Vinci laid the foundation for mannerism, which will increasingly manifest itself in the following years, which replaced the Renaissance."