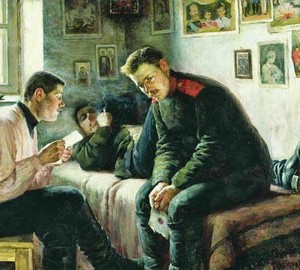 The picture depicts three characters in a small ordinary room of the barracks. One of them lies, smokes a cigarette, the second sits on the bed at his feet, the third is located next to an ordinary wood unpainted stool. All three are fighters, two in bed are in full uniform, the third one reading the letter is dressed in uniform pants, boots and a snow-white loose shirt with wide sleeves.

The room with whitewashed walls is poorly furnished, a rude soldier’s blanket is on the regular bed, and the walls are decorated with paintings cut from magazines, cardboard icons and photos sent by relatives. From the window you can see the inner parade ground, surrounded on all sides by the same faceless whitish barracks.

The life of a fighter in those days was a heavy burden, because they “shaved” for about seven years, and this meant for a domestic man to part with his family and friends, children for a long time – leaving the baby as a baby, he would turn back home and become a stranger for the baby, because the main the baby’s formative years passed without a father. But a century earlier, the service life was 20 5 years, and earlier – and absolutely indefinite!

Judging by the expression on the face of the soldier sitting on the bed, the letter is addressed to him and the announcements from the homeland are completely disappointing. The fact that another person is reading it shows that the fighter is illiterate. He holds an envelope in his hands, deep in thought, lost in himself.

Increased attention to detail allowed the master to highlight the features of the life of a fighter, because in this picture, apart from three living people, there are a lot of other images – any picture on the wall is a historical section, a reflection of the reality of those times.

The painter made expressive images, choosing a rather everyday theme for the picture, but was able to breathe life into his own characters, made them truly expressive and memorable."