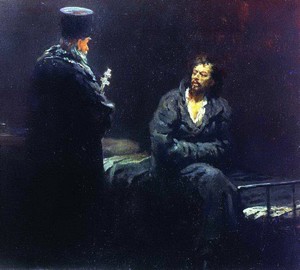 The idea of ​​the plot of the presented picture came to Ilya Repin by chance – he caught the eye of a poem in the banned journal Narodnaya Volya, which bore the title “The Last Confession.” In the work of N.M. Minsky (Vilenkin) was told about a revolutionary who refuses to repent before a priest who is ready to forgive him for his sins. Sentenced to death considers himself right, therefore does not need repentance.

Repin exchanged a passionate argument in the poem with frantic silence on the canvas. The priest squeezes a cross in his hand, waiting for the prisoner’s decision, without actually experiencing any enthusiasm – neither fiery appeals, nor religious admonitions. The exhausted suicide bomber in a dirty robe with disheveled hair and saggy mustache, ready to accept his fate, was simply exhaustedly exhausted, but, nevertheless, remained strong in spirit. He seems to recoil from the priest, proudly throwing his head up – his whole pose says: “no, don’t!”

The painful mood is supported by the color scheme. A dark background fills a huge part of the canvas, only two figures are highlighted by an invisible source to the viewer. Side light grabs a poor environment – a moderate metal bed.

Strict censorship did not miss the work for the traveling exhibition, citing an unacceptable plot, and the viewer got acquainted with the “Refusal of Confession” only 10 years later. Although a revolutionary society perfectly understood the picture from photographs.

It is clear that Repin returned to this story many years later (1913), creating a watercolor version of the painting.

Stasov, who once, together with Repin, got acquainted with a poem in an illegal magazine, wrote to the painter after he saw the picture: “Ilya, I’m beside myself – not that of admiration, but of happiness … this is a real picture, which can be picture!”

And perhaps this is the best criticism …"