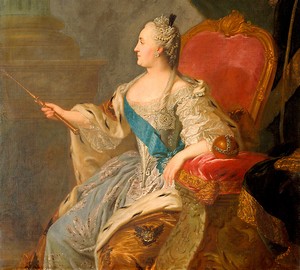 This portrait was more beloved by the Russian Empress Catherine II in the midst of all its countless ceremonial images. It reflects all the principles of the formation of holiday portraits of the ruling elite and was timed to the time of the coronation of the majestic empress. Her “golden age” is yet to come, but in the portrait she already appears as a majestic ruler, a powerful and wise “mother of the Fatherland.”

In the picture you can find all the classical principles of the ceremonial image, which refer us to the traditional methods of depicting kings, developed in the days of Old Rome. In fact, there are a lot of references to this time on the canvas. For example, the composition of the picture with the empress sealed on the throne immediately indicates her dominant position in society, unattainable for other mortals.

Catherine II is depicted in profile, which is also typical of antiquity. Her face is read correctly against the background of dimly visible traditional architecture in the background with a bulky column. It looks exactly the same as the profiles of the great Roman kings on coins and medals from antiquity.

The canvas impresses not only with its own composition, but also with many complex details. The most expensive materials — brocade, taffeta, silk, moire, organza and lace, gold embroidery — which are very difficult to depict, were used to dress the empress. The painter professionally mastered the task set before him. He wrote out in detail each element of clothing and jewelry, managing to connect them with color and light so that a sense of integrity and harmony appears at the highest level.

The color palette of the parade portrait amuses with its own freshness and elegance. The empress’s dress is dominated by delicate and light pearl colors, which are in perfect harmony with her white skin and fair-haired hair, laid in a sophisticated fashionable hair back then. The attention is attracted by two brightest contrasting spots, which, however, do not “creep out” to the frontal plane due to the artist’s use of softened, “dusted” colors. This is a red upholstery of the throne in a rich gilded carved wood frame and a moire order ribbon of blue color, thrown over the sovereign’s shoulder. These colorful paints and powerful black drapery in the folds in the background break and complement the bright iridescent colors of the coronation secured outfit.

The portrait shows us a strong-willed lady, chosen by God herself to rule her own big state."