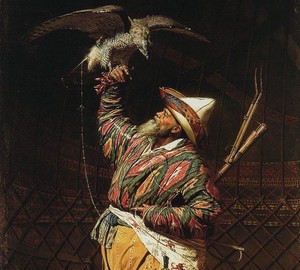 The painting was created by the artist in his “Turkestan” period, when he traveled to Central Asia, heading to China. Although during this period military operations against the Russians were conducted in this troubled area, the master was protected by friendship with the head of the first of the Kyrgyz tribes, Baitik Kanaev. This man was loved by his people and respected even by his enemies, because no one dared to touch the artist. The result of his trip was a huge number of paintings, many of which became world famous.

The canvas depicts Kanayev himself in the form of a wealthy nomad since then. Although he was sympathetic to the Russians, he was captured in the usual criteria for his own tribe – in a yurt, with an eagle in his hands. Only very experienced and wealthy people could hold such a bird and hunt with it, because on this canvas it also serves as an emblem of the status, highest position and skill of Kanayev as a great hunter.

It turns out to be a catchy, orientally lush and unusual outfit of a wealthy Kyrgyz. These are trousers designed for riding and richly crowned with embroidery and appliqués, a motley Central Asian dressing gown, belted with a huge light shawl with a color pattern, an ordinary Kyrgyz felt hat and soft leather shoes.

The hunter is armed with a very long gun and knife in a richly sheathed scabbard. Behind the belt he has the usual state lash of woven rawhide – kamcha. In the picture, all the details are professionally and with precision in jewelry, and with all its color saturation, it does not look colorful. The master really succeeded in depicting the figure of the Kyrgyz – he seemed to be alive, forever frozen in his own yurt with an eagle in his hand."