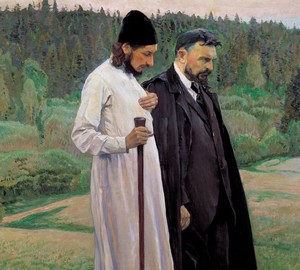 The pair portrait of Nesterov, which depicts S. Bulgakov and A. Florensky, is an expression of admiration for these outstanding personalities, the pillars of Russian religious and philosophical thought.

Two philosophers didn’t “sing in unison” – their eyes were different, but it was this dualism that the painter tried to portray. A quiet, measured evening, the muffled colors of nature became the scenery for a slow walk of two thinkers who wander along, but separately in a single desire to find the truth.

The figures of the heroes seem to be copied – the same lowered head, shoulders, placement of the body. But the faces are structurally different. Florensky in a snow-white cassock embodies humility, submission to fate, while the stubborn face of Bulgakov tells the viewer about internal restlessness, rebellion, and opposition. There is a stubborn gaze, and a twisting eyebrow, a naughty tuft on the head of black little touched gray hair.

The landscape on the canvas seemed to fade – here measured peaceful tones: from pale green to yellow. At the top of the picture shows the sky, which the pink rays of the setting sun have already touched.

It is clear that the picture was painted in one thousand nine hundred and seventeen, when revolutionary action almost turned the life of the country, sweeping away all the foundations, standards and zeal.

The actual path of the heroes of Nesterov after the revolution, as well as their tireless search for the truth, turned out to be difficult – Florensky, the undisputed genius of Russian thought, died in the Stalinist camps on Solovki in the 30s. Bulgakov was obliged to immigrate by decree of Lenin on the eminent “philosophical ship”. At first he lived in Prague, and then in Paris, where he died from laryngeal cancer in one thousand nine hundred and forty-four years. Eyewitnesses of his death recall that in the last hours the face of the exiled theologian and philosopher, in the end, brightened and became cheerful, as if he had calmed down and found peace. With such a cheerful face, he went into another world. Maybe, after all, he saw such an elusive and passionately sought by him truth …"