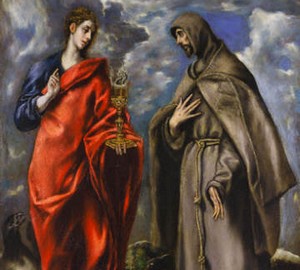 El Greco painting is attributed either to mannerism or to baroque, in fact it does not belong to any of the trends. The original manner of this artist is expressed in the presented picture.

El Greco portrayed on it St. John the Evangelist, conversing with St. Francis. At the feet of John is placed his sign – an eagle, and in his hands the apostle holds a cup from which a dragon comes out. The master here recalls the story of how a disciple of Christ, preaching His word, was captured and sent to Rome, where he was given a bowl of poison. After drinking it, John remained unharmed. In the picture, the cup in hand symbolizes the church, and the dragon, which eventually changed the snake in this iconography, is evil conquered by faith. An example of such a faith is St. Francis.

El Greco’s usual elongated figures resemble flames above candles. The earth, extending at the feet of the saints, emphasizes the scale of their images, and the background is a heavenly blue with dense clouds along which John and Francis could ascend to heaven."