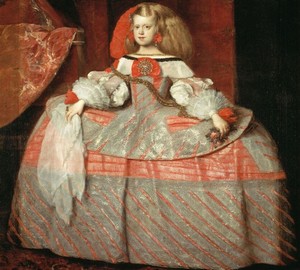 Almost from the moment she was born, this little girl was given to her wife, which is why so many portraits of her were preserved while she was growing. This typical report in the images introduced the world to Infanta Margarita – the little “pearl” of the Spanish Habsburg court.

The painting was started by Diego Velazquez in the year of his death, and completed by his son-in-law, Martinez del Maso. In it, the hand of the great master is immediately visible, first, in the construction of the composition and in the image of the girl’s face. Many believe that the painter flattered the child, softening the usual “Habsburg” features of his face, giving out countless family marriages.

Juan Batista worthily continued the work of his own father-in-law, bringing the canvas to perfection. This is a traditional ceremonial portrait with a frozen, static pose and powerful vestments, very languid for a fragile baby. The girl’s pink and silver dress is richly decorated and “worn” on a large crinoline, because of which her hands practically lie on it. She does not smile, and in her eyes a completely childish expression of humility with her own fate was frozen. It is evident that she was accustomed to posing and idle for hours in a heavy awkward dress.

Margarita, as the princess is supposed to, is richly decorated with jewelry, despite her young age. Her hairstyle is very lush, like everything on this canvas. A girl stands against a languid reddish curtain and a large drapery, gathered by spectacular folds. The painter amazingly conveyed various textures of fabrics – a gaping satin, thick velvet, gold and silver threads.

But most of all, the girl’s face attracts the eye. It has already lost childhood plumpness and it is clear that it will never grow short, but it expresses an understanding of its own duty and duty. And this is a baby of nine years old! Before us is Margarita – a small victim of palace etiquette and marriage plans of the dynasty."