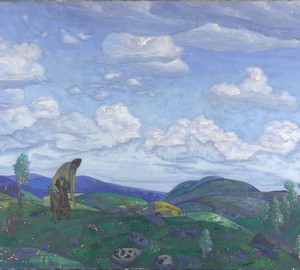 Panteleimon the healer is a famous saint who is addressed with prayers for healing from diseases. In the pantheon of Russian saints, he is one of the most revered. It is curious that usually in Orthodox iconography he is portrayed as a young man. But in the interpretation of Roerich, Panteleimon is an old man bent over the years, moving with a stick because of weakness and old age.

In the picture, the saint is busy with his professional work. Panteleimon was a doctor who believed in the power of the divine in all living things. He treated the sick with the help of medicinal herbs, which he collected through forests and fields. According to legend, the saint never destroyed even weed and poisonous plants, treating God’s creation with respect and reverence. Only harmful herbs did he tenderly reprimand and threatened with his finger, urging him not to do evil.

The canvas captures large places with tiny trees growing here and there. Tiny against the background of the landscape, the elder seems a giant in comparison with these small trees.

The picture is almost filled with air, which is emphasized by the distant mountains painted in blue and the closer mounds, streaked with striped shadows. The peaks of the hillocks appear green, as they are illuminated by the rays of the sun. The whole place is almost strewn with blooming plants, the colorful colors of which are almost sparkling with precious stones in green grass.

The old man wanders along the hills and plains, peeping and collecting medicinal plants in his bag. He already has so many of them that they are one hundred percent and do not fit in the bag.

Large open spaces in the picture are emphasized by the highest, bright sky, through which light, shaggy clouds float. The picture is filled with light and cold color, and the bent figure of the saint seems to be just part of this wide landscape. He is dressed in classic monastic clothes, on his head is a black cone-shaped hat or hood, a black cassock and a light cape, the color of which reflects greenish herbs.

The saint does not stand out sharply against the background of the surrounding nature, but seems to be its organic part. This emphasizes that Panteleimon’s healing is a divine and natural gift that he used for the entire population of the earth, even sacrificing his own life. The pagans tied him to the olive tree and wanted to chop off his head for an unshakable Christian faith. According to legend, due to the prayers of the saint, the blade could not destroy it immediately. When the head was nevertheless cut off, milk flowed instead of blood, the olive fruited, and Panteleimon’s body, thrown into the fire, did not burn, but remained intact.

It is curious that the painter will repeat this picture in one thousand nine hundred and thirty-one years in brighter and more varied colors.