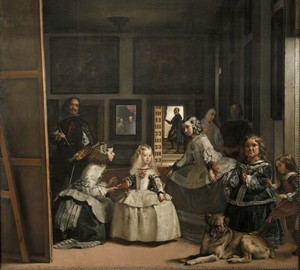 Surely, “Menin” is a more popular and well-known picture of the artist, which virtually everyone knows. This large canvas is one of the best works of the artist. It is distinguished by virtuoso mastery of execution and a fascinating plot, as well as by some unusual tricks that set it apart in the midst of a huge number of similar portraits of representatives of the ruling classes.

The picture impresses with its scale and versatility. Firstly, this is a very large canvas, and secondly, several workshops of artistic techniques were used immediately to expand the space in it. The painter placed the characters in a spacious room, in the background of which there is a door with a sovereign standing on the lighted stairs in dark clothes. This immediately indicates the presence of another room outside the room, visually expanding its size, depriving two-dimensionality.

The whole image is slightly offset to the side due to the canvas facing us with the back side. Stepping back a little, the painter is standing in front of the canvas – this is Velazquez himself. They paint a picture, but not the one that we see ahead of us, because the main characters face us. These are already three different plans. And this didn’t seem like much to the master, and he added a mirror in which the royal couple is reflected – the ruler of Spain Philip IV and his wife Marianne. They lovingly look at their only child at that time – Infanta Margarita.

Although the painting is called “Meninas,” in other words, maids of honor at the Spanish royal court, the center of the image is the little princess, the hope of the entire family of Spanish Habsburgs at that time. Five-year-old Margarita is not measured by age, self-confident and even arrogant. They look at others without the slightest excitement and configuration of facial expressions, and her tiny baby body is almost chained in the hard shell of a magnificent court toilet. She is not embarrassed by noble ladies – her meninas – crouched before her in the deepest bow according to the formidable etiquette adopted at the Spanish court. She is not even interested in the palace dwarf and the buffoon who laid his foot on the huge dog lying on the frontal plane. This little girl holds on with all possible grandeur, personifying the long-standing Spanish monarchy.

The picture was painted in pleasant silver tones without flashy colors. The distant plan of the room seems to dissolve in a light gray haze, but all the details of the complicated outfit of the little Margaret are written out with fine details. The painter did not forget himself either. Before us is an impressive middle-aged man, with lush curly curls, in dark silk clothes and with a Sant Iago cross on his chest. Because of this insignia that only a purebred Spaniard could get without a drop of impurity of Jewish or Moorish blood, a little legend appeared. Because the painter received the cross only three years after writing the canvas, it is believed that he was finished by the ruler of Spain.

Upon closer examination of the canvas, one is surprised at the number of artistic techniques used in the work. To write faces, the finest glazing was used, in which paints were superimposed with the finest translucent layers. Details of the clothes, on the contrary, are written out in small luxurious strokes. They breathtakingly convey the texture of lace and velvet, the finest sewing and the intricate texture of the Infanta dress. The environment, as it were, is done in watercolor or pastel, dissolving in the lightest, vague atmosphere.

One of the master’s most recognizable paintings is in the Prado Museum, where until now it has been capturing the gaze of a huge number of guests."