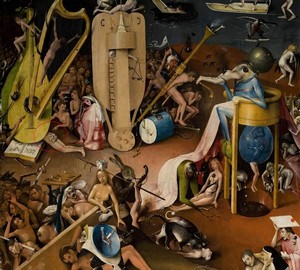 Hell is the right wing of the artist’s most famous triptych under the title “Garden of Earthly Delights”. Under this lyrical title lies a far from sweet and idyllic picture. In fact, the triptych is made completely in the style of Bosch – fearsome visions, grotesque figures, terrible images are practically everywhere here.

In the artist’s vision, hell becomes a terrible surreal place. Critics often call the right wing of the triptych “Musical Hell” due to the fact that a huge number of different musical instruments are used here. But do not assume that they are used for its intended purpose. In fact, they do not even play the devils, as one might suspect. Bosch decided to use the methods of their implementation that are very far from the intended purpose of musical instruments. Almost always, they act as torture devices.

For example, the artist’s harp plays the role of a cross for crucifixion or rearing up – an unfortunate sinner is spread on it. An innocent lute became the subject of torture of another poor fellow, who lies face down. It is curious that notes are printed on his buttocks, along which a completely inconceivable choir sings – cursed, led by a conductor with a fishy “face”.

The frontal plan of the picture is able to shock even the modern person tempered by “horror”. Bunny drags a man with a torn belly, which is tied to the pole. With all this, the poor fellow practically pounds a stream of blood. The carnivorous bunny looks very peaceful, and this is truly a terrible contrast in comparison with what he is doing and what his action in the coming should mean.

The abnormality of this place is emphasized by the indescribable sizes of berries and fruits, here and there scattered throughout the sash. When you look at it, it is not clear who is eating whom – people are berries or berries of people? The world turned upside down and became hell.

A frozen pond with wormwood, where a sinner riding on a huge skate rushes, people soaring into the light like brainless midges, a man grinding in a door lock – all these images are allegorical and certainly understood by the artist’s contemporaries. Some of the seen can be completely interpreted and interpreted in our days, but already on the basis of the convictions of a man of our time, and not of the late Middle Ages.

It is curious that the researcher of Bosch was able to decipher the notes engraved on the ass of the sinner. It turns out that the painter recorded a completely connected melody that you can play and listen to. But this is the only ordinary real element in the delusional world of his hell."