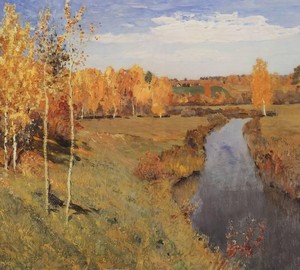 The catchy, ocher color, interspersed with reddish and orange, pouring from the canvas, is so sweet that even in spite of the signature on the frame, you can just think of it – before us is “Golden Autumn” by Isaac Levitan.

The painting was first presented at the 24th exhibition of the Wanderers, and its meticulous work preceded it. At first, sketches were made from nature – the creator in the fall, one thousand eight hundred and ninety-5 years lived in the estate of Gorka in the Tver province, there he found the plots, and was finished in Moscow.

Immediately, the mood of work attracts attention. The painter from elegiac, very subtle and spiritual works suddenly turned to a lush, bright, festive landscape. Usually, all the important actions in the life of the creator necessarily find their own response in his works, and Levitan was no exception – his personal life was in full swing and was full of passions during the writing of Golden Autumn.

Being in close relations with Sofia Kuvshinnikova, Levitan fell in love with Anna Turchaninova. She was resting in the adjoining estate. A tumultuous romance developed, reminiscent of literally book passions. Kuvshinnikova tried to commit suicide (thank God, the eccentric person did not succeed), Anton Chekhov openly condemned her friend’s passionate interests, and his sister Maria (whom the painter had also been unrequited in love at one time), and Levitan himself lived in anticipation of happiness. Chekhov also spoke out negatively about the artist’s work done during this exciting period, scolding for excessive “bravura” and decorativeness. The same comments applied to the “Golden Autumn” – where did the narrow lyric poet, the penetrating painter painting spiritual quiet landscapes, go?

Now, art critics relate the presented painting of Levitan to the so-called major series, which, in addition to Golden Autumn, includes works “Spring. Big Water ”,“ March ”, etc. And ordinary viewers like it for its sensuality, expressiveness and colorful holiday colors.

When writing the sketches in Gorka, the master was made all the conditions – on the lake in the estate a workshop was built especially for Levitan, already in two floors. The landscape depicted in the picture was only half a kilometer from the personal workshop – this is the Syezh River near the town of Ostrovno.

A narrow river with rather high steep banks originates from the lower right corner of the canvas, in order to divert the viewer’s eyes directly to the horizon, through the autumn forest, to slightly noticeable fields and village houses. In the dark, measured waters the sky is reflected, but with all this it is not in the autumn quiet and light (an unusual element for Levitan).

The point of view was chosen very successfully, because it allows you to build a wide panoramic composition with an abundance of parts. If we analyze the picture in detail, it can be noted that the details on the canvas are unevenly distributed – the left side is more loaded, but this does not lead to asymmetric sensations, because Levitan well “arranged” and grouped all the elements of the landscape.

As previously mentioned, the chosen gamut in this picture is not characteristic of the painter – very colorful and rich colors, but moving deeper into the picture, you can see how the spectrum becomes more measured and ordinary.

Not everyone shared the skepticism of Anton Pavlovich Chekhov about this work. In general, the picture received a lot of the most positive and admired reviews. The splendor of the landscape, sensual fullness, golden brilliance were noted. Also, art critics adore this work as an example of the impact of Euro impressionism on Levitan’s work.

A year after writing, “Golden Autumn” was bought by Pavel Tretyakov directly from a traveling exhibition. The new owner suddenly had obstacles with the execution of the transaction, and the picture wandered for a long time at the exhibitions of the Wanderers, waiting for Pavel Mikhailovich to pick it up. But in November of the same year, exhibiting in Kharkov, misfortune understood her – the heavy copper peak of the heater, falling from the wall, pierced the canvas through. The restoration work was hastily carried out, and through the efforts of the restorer Dmitry Artsybashev, the painting again regained its original appearance. Although Levitan himself was very worried whether the promised deal would take place in connection with this sad incident, but Tretyakov did not refuse the Golden Autumn and immediately after the purchase gave it as a gift to his own gallery, where the picture is still located."