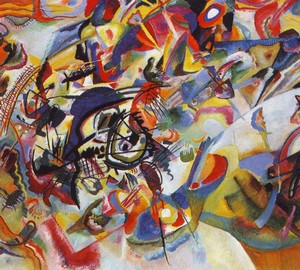 Apart from the detailed theoretical justifications of his own work, Kandinsky left over 30 sketches that show how meticulously the preliminary process for writing Composition VII went through. The work itself was completed in four days, for which there is photographic evidence.

It is possible to consider a picture only from the standpoint of the Kandinsky case regarding form and color – only in this case the composition acquires a great deepest meaning. The dominant colors of the canvas are reddish – a sign of strength, purposeful vast power; pigeon is the color of peace, and snow-white is the personification of eternity, primordial being. Also in the work is a yellow color, which the creator has always described as windy and quickly scattering.

The color content is supported by a meaningful composition of the work – it is a form that unfolds on a sideways, closed in the rectangular space of the canvas. The central motive of the painter declared a rounded shape, which is crossed by a huge number of incorrect rectangles. Moreover, all this structured conglomeration looks like a practically clearly marked cent, acting in a whirlwind of flowers and whimsical lines.

Art historians and researchers, based on diary entries and studies of Kandinsky’s work as a whole, concluded that Composition VII combines several themes together in its plot-emotional awareness – the Terrible Tribunal, the Global Flood, the Resurrection from the Dead, and the Garden of Eden."