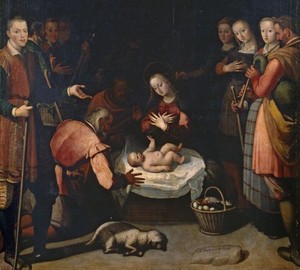 This picture was created according to one of the most favorite biblical subjects – the birth of Jesus Christ. The canvas is distinguished by a composition that visually separates the plane of the canvas into three transverse elements. The lower part, on which the protagonists of the action are captured, personifies the earth; the middle black stripe separates the sky from earthly life; the highest part depicts the kingdom of heaven with angels prayerfully kneeling.

The black background underlines the reference to the Bible, according to which the Virgin Mary gave birth to Christ in a cave, which served as a stable for livestock. The white lamb also recalls this peacefully sleeping at her feet. This is a typical play of signs – a lamb not only emphasizes the birthplace of Jesus, but also personifies him – the “lamb of God”.

In the center of the lower part of the composition, the Theotokos herself is depicted, with her hands folded on her chest and looking lovingly at the baby lying on her lap. She is wearing a reddish dress and a black board draped over her hair.

Countless characters with musical instruments in their hands surround this lyrical and tender scene of motherly love. They are dressed in a fashion similar to a contemporary artist. Painstaking detailing and beautiful image of small parts give the corresponding handwriting of the artist. These people stand in a semicircle, forming a typical noble guard near the baby Jesus and his mother.

The haze of the arch of the cave evenly runs into a layer of clouds above it. On their knees are five angels with large wings in longish, loose robes of various colors. They are also placed in a semicircle, being a typical reflection of what is happening under them, on the ground.

The canvas is distinguished by harmoniously selected colorful, but not flashy, slightly muffled colors and rich coloristic politra."