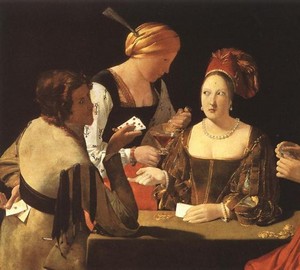 A sharpie with a tambourine ace – Georges de Latour. 1633-1639. Canvas, oil. 106×146   The brushes of the artist Georges de Latour (1593-1652), formed under the influence of Caravaggio, belong to a wonderful genre canvas “A sharpie with a tambourine ace”.   An exciting company gathered at the gaming table. The lady, most likely a courtesan, attracted a young and inexperienced wealthy young man to play the game, along with another guest. The girl with the guest is old friends and even partners: he – sharpie, his task is to beat, she is a lady, her goal is to lure. The guy agrees to play, and to ease the attentiveness of the guest, the helpful servant pours him wine. The painter perfectly conveyed the intense atmosphere of the game. His heroes are silent, but their eyes say a lot.   After the death of the master, the canvas right up to the 20th century was attributed to another creator. It fell into the collection of the Louvre in 1972."