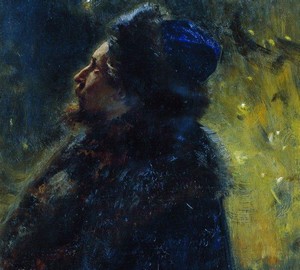 This picture is an expressive image made using a combination of 2 techniques – large painting with spectacular large strokes and painstakingly painted face of the character.

The famous Russian painter Vasnetsov V.M. is depicted in the form of the famous epic hero Sadko. This fascinating moment reflects the activities of Vasnetsov himself – he became famous as the creator of countless canvases dedicated to Russian fairy tales, epics and legends.

On the canvas, the character is depicted in profile, on an unexpressed, iridescent bluish-yellow background. He is dressed in a voluminous fur coat and a fur hat with brocade top – an ordinary outfit of a Russian nobleman. Although the clothes are written in outline, its texture and volume are perfectly readable, it is felt that the fur is lush and shaggy.

The picture is dominated by black tones, which allows you to capture the attention of the audience on the expressive face of the character. The profile of the great artist is lit from above, as if by cool moonlight or starlight. This truly sets it apart against a blurry background. Unlike everything else, the character’s face is depicted very clearly and expressively, in all details. This inspired appearance forever remains in the memory of all museum guests."