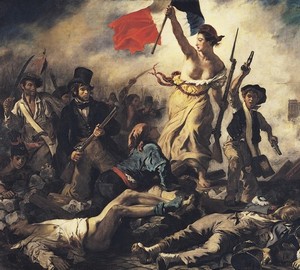 The struggle for freedom and independence of France is devoted, for sure, to the most famous work of the head of the French romantic school of painting. Eugene Delacroix (1798-1863) “Barricade freedom“, Inspired by the revolution in Paris in July 1830.

Faced with the task of depicting the abstract concept of “freedom”, the painter used allegory. Born in a turbulent revolutionary time, the dream of freedom, bringing change to life, was embodied in a half-naked lady. In its form, features of the samples of ancient art are visible: the proportions of the face correspond to the canons of beauty to which the Greek statue obeyed.

But this modern Venus lost the detachment of Greek prototypes and became the embodiment of the standards of modern times. Loose clothes, fluttering in the wind and telling its appearance and picture the dynamics that are appropriate for romanticism, are complemented by a cap of Jacobins (members of the political revolutionary movement), a gun, bayonet and banner. The heroine was assigned a central place on the canvas, although at first Delacroix was not going to portray her as an allegory, but wished to limit himself to the romantic death of the beautiful hero of the barricades. A woman calls to go forward, even if the lifeless bodies of those who have already given their lives in the struggle block the path.

People, most of them students, took to the streets to seek the lifting of a number of government restrictions. The painter painted himself among the rebels. Very close to reality, the depicted victims, placed on the frontal plane of the picture, were charged with the artist as shocking and shocking to the public."