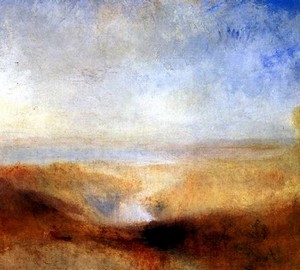 British painter of a romantic school William Turner (1775-1851) professionally conveyed atmospheric effects, in its landscapes the main “hero” is a light-air environment. In the work on his works, the painter used Goethe’s color theory, according to which color is born from the interaction of light and shadow, and the difference in colors comes from the difference in the degree of intensity of light and darkness. Turner was interested in modern research and discoveries in the field of physics and chemistry, the physiology of color perception by the human eye. In his own art, he did not seek to imitate the paintings of old masters and did not go on about the general public. Many did not perceive his painting, especially those works in which the painter of the mid-19th century came close to the abstraction that appeared on the world art scene more than half a century later.

“Landscape with distant river and dam“Refers precisely to this type of Turner work. The objects are devoid of precise outlines, the silhouettes are blurred and unclear. Modeling of volumes is carried out thanks to gradations of color. But the composition is based on a linear drawing: it is read in the assembly of plans, the outlines of the river bed and a low strip of the horizon.

The painting was acquired by the Louvre in 1967."