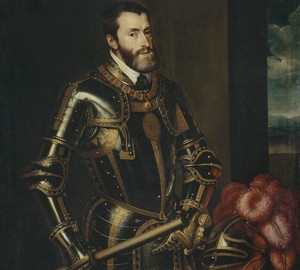 The portrait of the ruler was made by the artist in the last years of his life, when his style reached perfection in fixing the countless details of the clothes and surroundings of Charles V. The ruler is depicted in the warrior, in dark-colored ceremonial armor richly decorated with gold, engraving and rich in small details. Karl stands, turning to the audience in three quarters, in a tense pose, suitable for ceremonial portraits of those times. A large gold helmet with a visor down is on a low table, covered with a red silk tablecloth topped with gold embroidery. The plume of a helmet made of lush ostrich feathers of all reddish colors is in perfect harmony with the black and gold of other armors.

The ruler’s hands are chained in plate gloves. In one hand he holds a long object in the form of a cylinder, most likely, the laws rolled into a tube adopted during his reign. The second hand, also in a glove, rests on the thigh.

On Karl’s legs are the highest, light-cream-colored boots attached to the belt, mounted on snow-white, longish stockings. The boots are decorated with ceremonial spurs – small ones, made of gold or gilded metal. From under the armor you can see the highest snow-white shirt collar and silk tie.

The background of the picture is the most moderate, neutral. They serve as an image of a black wall, turning into an equally inconspicuous, inexpressive floor. The effect brightens the part of the window with the landscape and the table on powerful straight legs.

Carl’s face betrays his origin, or rather, his usual long nose, suitable for the Habsburg dynasty. He wears a loose and very well-groomed little beard and mustache, a short haircut, dark hair. Before us is a man in his prime, authoritative, strong and indescribably wealthy, having at least a dozen crowns of various levels. From all of his appearance, successfully captured by the artist, comes a sense of strength and great, almost unlimited power."