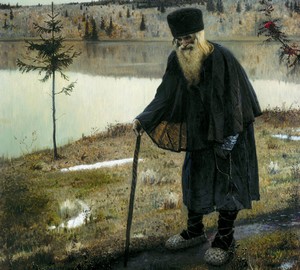 In the painting “Hermit” M.V. Nesterov portrayed a man of advanced years, slowly wandering along the path near the lake. Most likely, he lives somewhere nearby – in a monastery or monastery. He is wearing rather light clothing, he is shod in bast shoes, on his head there is a hat similar to a monastic camille. In one hand he holds a rosary, and the other rests on a makeshift staff.

It’s already deep autumn. A lone, ragged Christmas tree stumbled across the shore. And although in the middle of the dead grass there are still flashes of greenish, somewhere already there is snow. Rowan, has not yet lost its own burgundy berries, looks into the picture and little resurrects the landscape. Not frozen, but such motionless cool water gently glistens behind the old man.

On the other side of the lake, the landscape also doesn’t amuse the eyes, only spruces turn green from time to time, and in the distance the forest darkens. Maybe it’s where the old man’s deserts are located. He went for a walk to enjoy the calm autumn day. The state of wilting nature is close to his soul, he is also in this season and accepts it quietly and with humility. Nothing worldly bothers him anymore. He forgave all his own wrongdoers and himself received forgiveness. At the moment, there is peace and quiet in his soul.

This old man lived a long life – his hair turned gray, his back was bent, he barely moves his legs. But bodily diseases do not bother him at all. He looks with his wisest eyes inside himself and feels not only unity with this quiet, deserted place, but also unity with the main being to which he aspires – with God. The Hermit smiles – he is fine at the moment.

He is still on the ground, his body casts a shadow, which he tramples, walking along the path. And this is symbolic. After all, he is a monk, and is constantly fighting his own flesh. And in the feat of fierce struggle, holiness is born.

The painting “The Hermit” is painted in muted tones. This is in accordance with the artist’s idea and creates an atmosphere of spirituality and peace."