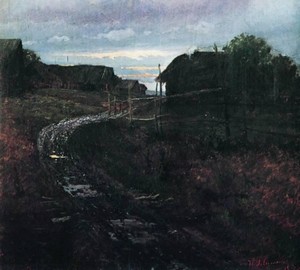 In one thousand eight hundred and seventy seven years, at the 5th exhibition of the Friends of the Wanderers, a young, aspiring painter Isaac Levitan presented two of his works to the public tribunal: “Sunny day. Spring “and” Evening “. Obviously, the paintings were not exhibited in the main hall, because Levitan was still completely unknown, but in a special student unit, which bore the 5th serial number.

Ultimately, “Evening” in conjunction with “Sunny Day” were the earliest surviving works of Levitan. The canvases were immediately noted by critics, and Isaac Ilyich was awarded a small silver medal.

What did the audience “catch on” with? Truthfulness, sensuality and narrative. We see an abandoned, impoverished village, to which we are led by a broken land road with ruts knocked out from cart wheels and stained puddles. The creator decided to portray this place at dusk, slightly colored by the flashes of a reddish sunset. Because all the elements, nondescript huts, trees, a rare wattle, we see almost in the form of silhouettes. Somewhere I have to guess – what appears through the evening half-haze there.

Sunset, it would seem, was supposed to resurrect a sad rural landscape, but no. Breaking through a dense curtain of clouds, reflected in puddles on the road, the sunset light, in the most unthinkable way, only emphasizes all the sadness, sadness and loneliness of the plot. It even raises a certain alarm, which has been repeatedly noted by many art critics and critics.

Looking at the canvas, the question involuntarily arises in my head: why is the plot so sad for a young, full of creative forces and obviously gifted painter? The answer is simple – the picture can be called a typical tuning fork of the creator’s spiritual state, and Isaac Ilyich really had a hard time during this period. Not so long ago, he lost his father, and 2 years earlier his mother died. That’s why the images and ideas generated by the artist’s creative inspiration are sad.

In fairness, I would like to note that such a minor interpretation did not stand out among other paintings of the Wanderers that were similar in plot. Specifically, such a mood dominant was in almost all the paintings of masters of an independent society. Levitan was even associated with Arkhip Kuindzhi, whose fame just boomed at that time in Russia.

The painting “traveled” a lot, before, in the end, to acquire an invariable place. Initially, it was bought by the philanthropist and collector Ivan Sveshnikov, and after his death, according to the will, the painting, together with his entire collection, was transferred to the Rumyantsev Museum. After some reason, she ended up in the Municipal Museum Fund, and from there she was transferred to the Tretyakov Gallery, where she can be seen now."