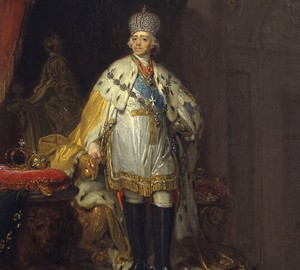 Before us is a portrait of the Russian ruler Paul I, reigning on the throne for a short time, less than 5 years, from one thousand seven hundred ninety-six years. The offspring of Catherine the Great and Peter III, he is considered one of the dramatic and ill-fated rulers of Russia.

On the canvas, Borovikovsky depicts a sir in ceremonial, most festive vestments. Pavel basically stands before the throne, his pose is proud, it feels like he likes this whole rehearsal before the coronation.

Under him, all the attributes of state power – the main imperial crown, ermine mantle, scepter, ribbon, chain and star of St. Andrew the First-Called.

But, first, Paul I claimed to put on a snow-white Dalmatian. Why is this very clothing so important for Pavel Petrovich?

The Dalmatian is the clothing of the Byzantine rulers richly crowned from expensive fabric, symbolizing justice and salvation in Christianity. It is also not a long mantle with wide sleeves, which is worn by grandmasters or the grand masters of the Order of Malta.

In one thousand seven hundred and ninety-eight years, when the religious chivalric order of the Roman Catholic Church was left without control and without a country of residence (Malta was under the influence of the English Empire), Paul I declared himself an intercessor and patron of the Order of Malta and was crowned the great master.

Borovikovsky emphasized the details of Pavel Petrovich’s accession to the order – the Maltese cross on the chest and on the crown of the majestic master, which lies on the table on the right, next to another emblem of royal power – the state.

Perhaps ruler Paul I, as a passionate supporter of all kinds of order rituals, saw a certain meaning in this combination, because the power symbolizes dominion over the whole world.

In the work on the portrait, Borovikovsky proved himself to be a wonderful master at writing the texture of materials – how the white velvet shimmers into folds, how the ribbons and fringe of the bottom of the dalmatian sparkle with pleasant gold, how ermine fur softly and generously feels, how precious stones on the crown are reflected."