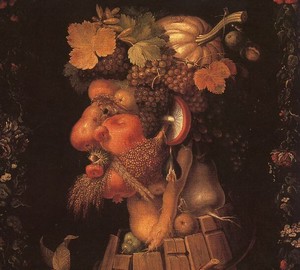 The allegorical image of Osaria in the form of a middle-aged man amuses with rich, warm colors and masterfully compiling an image from individual parts. The portrait consists of fruits: fruits, vegetables, berries, seeds, in a word, all the abundance that this season gives us. The picture is framed by a beautiful pattern in the form of a lush flower garland.

The deepest black background corresponding to the Renaissance was chosen for the canvas. It makes the effect of depth, the future darkness of winter, in which literally the fruits of the dawn are drowning. Ripe and juicy fruits that make up the face of the allegory of the Ozari play beautiful colors on it. These are pears, peaches, cherries, large, dense clusters of snow-white and dark grapes, playing the role of hairstyles, a large mushroom as an ear and a mature bursting fig, depicting an earring in it.

The character’s beard and eyebrows are cleverly imitated with the help of cereals – these are ears of wheat and panicles of golden millet. Even the protruding mustache under the nose is depicted with the help of a fetus – this is partly uncovered mature skin of an edible chestnut. The role of the headdress is played by a pumpkin with a protruding stem, and the leaves of the grapes form a lush crown.

The body is also depicted professionally. For him, the painter used the cracked rivets of a wine barrel, tied together by a strong vine, crowned with rose hips and roses. The powerful neck of the “Autumn” is composed of root crops.

This is a breathtakingly modern painting, characterized by a surreal style, amuses the eye with the skill and imagination of an artist of the 16th century."