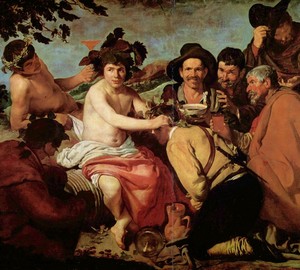 This large-scale canvas served as a striking confirmation of Velazquez’s skill in the development of multi-figure compositions, which, at that time, were often blamed for the fact that he excels in only one genre – portraiture.

The painting was painted before the master left for Italy. It depicts a group of guys led by the god of winemaking Bacchus. Naturally, all the characters gave the proper production of winemaking, which gave rise to name the picture by the second naming – “Drunkards”.

The canvas has a complicated multi-figure composition. All the characters seem to fit into a large oval, which makes the composition closed. All real “living” people are painted with ordinary colors, and only the god Bacchus is distinguished by white skin and special lighting – it seems that only on him the first rays of the sun fall in this complex group of different people. Moreover, he alone is not dressed, but draped with secured fabrics of snow-white and dark pink color, also decorated with a lush grape wreath. Two more characters on the left have wreaths on their heads, but they are much more modest than those of the deity. They are not accented, depicted as extras on stage.

Another sovereign kneels before Bacchus, bowing low to him, and God puts another grape wreath on his head. The three closest characters look at it with ecstasy, and the two standing behind talk to each other.