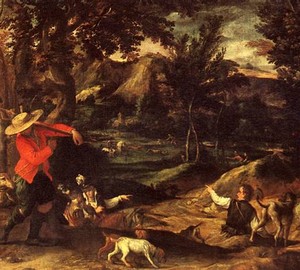 Hunting – Annibale Carracci. 1585-1588. Canvas, oil. 136×253   Annibale Carracci (1560-1609), inspired by the works of the Highest Renaissance, tried in his own works to achieve the purity and harmony of the paintings of this period, lost in the art of mannerism. Together with his brothers, the painter made an Academy in Bologna, where he taught, laying the foundations of academic art. He wrote compositions on religious and mythological subjects, as well as landscapes, ignored by painters of the era of mannerism.

Canvas “Hunting” represents several genre scenes, united by the plot, against the backdrop of a beautiful landscape. On the left, the hunter in the reddish bears on the stick the freshest carcass of the killed animal, in the lower right corner of the picture the characters are making necessary preparations, a little lower on the side of the mound (in the background of the canvas) the young man, looking into the distance, points at something, slowly moving on horses below and two more characters of the canvas are talking, and in the background in the plain there is a real hunt with rushing dogs and riders."