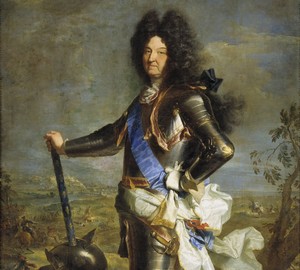 Portrait of Louis XIV – Hyacinth (Iasent) Rigot. 1701. Oil on canvas. 238×149   Hyacinth Rigaud (1659-1743) – one of the leading portrait painters during the reign of Louis XIV and Louis XV. Over the years of creative activity, Rigaud has made a huge number of portraits of his own contemporaries. In the early works of the master, the influence of Titian and Van Dyck is noticeable.   “Portrait of Louis XIV” It was written in 1701. The Sun King is represented standing fully armed on the background of a plain where military operations are unfolding. The snow-white fluttering fabric wrapping around the model’s waist resembles with its outlines a lily flower – the heraldic sign of the Bourbons. The portrait indicates the monarch at the top of his power.   Over the next 7 years, 30 four copies were made from this work in the artist’s workshop. The artist’s popularity was so great that among European monarchs it was considered prestigious to have a portrait of Rigot’s brush."