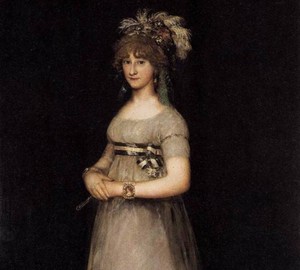 The elongated format of the picture and the thickening haze as a background give the countess a special fragility, emphasized by a light, airy dress of light gray-brown color with pink veins and a hairstyle, as if the wind was hidden. In the whole form of the maiden, even if of a royal kind, there is a sadness that shines through both living brown eyes and folded hands, which Maria-Teresa purposely tries to squeeze stronger. The countess was not going through the best time of her life at that time: her husband, the sovereign Prime Minister of the Spanish government, Don Manuel Godoy, had an imperative disposition, in addition, this man was a quacker of the queen. Goya was already drawing the countess, and now, knowing full well this young lady and treating her with compassion, I noticed her deeply hidden sadness. The portrait, made up by the parade, shows the viewer a lively and charming person.

Also connected with this picture is another curious fact. After the paintings were bought by the Prado Museum from the hands of a personal collector for 20 four million euros, it turned out that on top of this portrait was a portrait of the Marquis de Villafranca, and on top of it was a portrait of Countess Manuel Godoy’s wife. It was possible to install using new equipment"