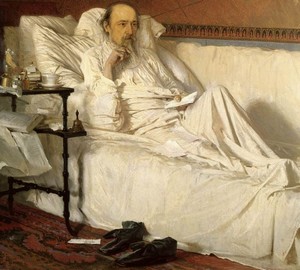 One of the most powerful and expressive portraits of Ivan Kramskoy “Nekrasov in the period of” Last Songs “. According to its own drama and plot content, the picture can only be compared with the last lifetime portrait of the composer Mussorgsky brush Ilya Repin.

At this time, Pavel Tretyakov got the idea to collect portraits of all the outstanding people of his own time, and he just did not have Nekrasov. With a request to write a poet, Tretyakov turned to Kramskoy, which he did not for the first time, and the painter responded to the order. So this amazing work appeared, capturing the gigantic strength of spirit, resistance, fearlessness before the disease in the name of the realization of creative inspiration. Nekrasov writes his last work – “Last Songs”, a typical testament to his descendants.

Eight years earlier, Nikolai Ge had already written to Nekrasov, but Kramskoy had more difficult work to do – in one thousand eight hundred and sixty-eight years, the poet was still full of strength and energy, but Ivan Nikolaevich had to work with a person who was no longer getting out of bed.

At first, portraying the poet haggard and on pillows seemed unimaginable, because the descendants should see the majestic Nekrasov in all its beauty, and it was impossible to imagine him in a house robe. But with all the hesitations and hesitations of the artist, Kramskoy remained true to himself – he depicted only the truth. In the end, the portrait came out chamber, even to some extent intimate, but the hero himself gives him monumentality and grandeur, his unbending strength of mind, the fight against the disease. This is a complete debacle of the disease before a creative impulse.

Nekrasov is pale and thin. His eyes are sad and very tired, but not these moods dominate in the gaze – the writer’s look differs in perseverance and concentration. Skillfully executed drapery with a sheet of the color of a word bone does not hide painful thinness. In the hands of Nikolai Alekseevich a neat stack of leaves on which the creator writes his work.

In addition to the clear properties of the hero, the details are thought out in the picture. That is why the picture borders on the genre between portrait and everyday style. There is a cup on the bedside table, and there are some medicines near it, the manuscript, books, and newspapers below. A small bell sounds very painful, with the help of which Nekrasov, who was practically not moving, called for a servant.

The paintings above the bed are black and white portraits of Adam Mickiewicz and Nikolai Dobrolubov, and the background is slightly darkened on the left – I can’t immediately see the bust of Vissarion Belinsky.

The result of Nekrasov’s posing sessions was a portrait, which depicts only the poet’s head, without arms. The portrayed liked the work of the portrayed, and he ordered two more copies from the painter, himself.

But Kramskoy did not confine himself to this – Nikolai Alekseevich, who was dying away, specifically in the interior of the room, the painter had finished only one thousand eight hundred and seventy-eight years, and, as this annoyingly did not sound, Nekrasov was no longer alive by that time."