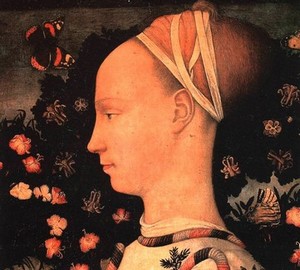 Portrait of Ginevra d’Este – Antonio Pisanello. 1435-1449. Wood, tempera. 43×30   “Portrait of Ginevra d’Este” (“Portrait of the Princess”) – the work of the Italian painter of the early Quattrocento Antonio Pisanello (1395-1455). The princess’s profile recalls chased images created on commemorative medals.   Some researchers suggested that the depicted is not Ginevra d’Este, but another representative of this house, nee Gonzago. But at present, it is believed that the portrait belongs to Ginevra.   Woman captured on a background of flowers. For the modern viewer, they mean no more than just a colorful “natural” background, but they could tell a lot about the contemporaries of the artist. Each flower has its own symbolic meaning and denotes a specific phenomenon. Included by the painter in the “context” of the work, these flowers carry a hidden meaning, revealing the life story of the princess. Ginevra d’Este was killed by her husband because she could not have kids. Carnation flowers and catchment bells symbolize matrimony and fertility, but catchment (aquilegia) has another meaning – death. Juniper twig pinned to the sleeve of the dress also speaks of death."