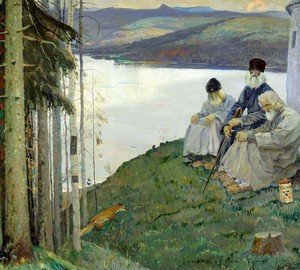 In one thousand nine hundred and one years, Misha Vasilyevich Nesterov made a pilgrimage to a monastery on the Solovetsky Islands. The painter was impressed by the trip for a long time. He was struck by the spirit of peace and the atmosphere of unity of man with flora and fauna, which was no longer met in the urban Russia. Nesterov was always distinguished by a reverent attitude towards Russian nature, and having seen the pristine Solovetsky Territory, he found his own utopia, which inspired him to the painting “Fox”.

The canvas was completed in one thousand nine hundred and fourteen, it is catchy that the painting had several names. The original title sounded like “Peace on earth, man’s good will” and was soon replaced by “Three Elders”. But among the people the work is often called “The Fox”, because without a luxurious animal there would not have been that color and a peaceful mood.

The genre picture indicates an everyday episode in the life of godly old men. Misha Vasilievich wanted to show his vision of heaven on earth – a godly life in harmony with nature, where every creature of God is a brother of man. Blessed hermits inspire empathy in the viewer due to their own earthliness and simplicity, while many saints are usually portrayed as inaccessible and estranged from all worldly things.

The canvas is visually divided into two parts, on the first there is a clearing where the righteous sit, on the second there is a dense forest. The master showed the idyll of this place, erasing the line between the feral nature and the human environment. The emblem of such unity was the fox, which is quietly heading towards people.

You can also interpret the number of elders on the canvas as a sacred message, because the number “3” in Christianity is of particular importance."