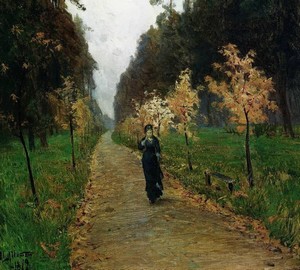 Picture “Autumn day. Sokolniki ”can be called one of the most basic works in the life of Isaac Levitan, because it is from her origin the fame of the painter.

It all started when Alexei Savrasov lured his own young artist Isaac from Vasily Perov into his natural class. Under the leadership of Savrasov, a complete reincarnation of Levitan came out. The difficult, poor life of a novice painter did not transform into accusatory plots, but, on the contrary, transform Isaac Ilyich into a narrow lyricist, sensitive and contemplative. Specifically, this was what Savrasov sought from him: “… write, study, but most importantly, feel!” And young Isaac studied … and felt, obviously.

Already in one thousand eight hundred and seventy-nine, a delightful picture arises dedicated to Sokolniki Park on one of the frowning autumn days. The public, and most importantly, Pavel Tretyakov, immediately drew attention to a nineteen-year-old student at the Metropolitan School of Painting, Sculpture and Architecture. The keen eye of this famous Russian philanthropist did not miss a single important work, especially when it read not only technique, but also poetry of color, plot, truthfulness, soul, in the end. “Autumn day. Sokolniki ”met all these characteristics, therefore it is logical that he bought the work directly from the student’s exhibition, which immediately attracted the attention of society to its creator.

What do we see in the picture? Deserted alley of the park, strewn with yellow fallen leaves. The grass is still green, but this color is not so catchy as in the summer, but on the contrary, withered in the autumn. Young trees grow along the road. They were completely planted not so long ago, because they are so thin, with rare crumbling foliage, and somewhere it is completely absent. As a contrast to this young growth, the edges of the painting were “surrounded” by the old trees of the park. The highest, powerful, dark green and slightly gloomy. And above all this poetic landscape, clouds are floating, grayish and frowning, creating a feeling of a damp cloudy day.

The central element of the picture is the heroine, but her presence “does not steal” the main role in nature. Faster, it acts as a typical tuning fork for the mood created by this park and autumn day. As Shishkin had nothing to do with bears from his own most famous work, so Levitan is not the creator of this noticeable, lonely figure. A lady in a dark dress, going straight from the canvas towards the viewer, was written by Nikolai Chekhov, a Russian painter and brother of the famous writer Anton Pavlovich.

The general mood of the canvas is sad and nastalgic, and there is an explanation for this. It was during this period that Levitan underwent the first eviction from Moscow, according to a decree prohibiting the residence of Jews in the city. Living in Saltykovka, Levitan recalled his beloved landscapes, lovingly transferring them to the canvas.

A close examination of the picture reveals a broad style of writing – both the road and the crowns are painted with a sweeping brushstroke. But after taking a couple of steps from the frame, all these wide brush movements are combined into an iridescent surface, and the blurriness of the palette adds airiness to the landscape.

Another unusual property of the canvas is sound imaging. It seems that you can clearly hear the gusty, but not long movements of the autumn wind, the creak of large pines, lonely rustling steps along the path, the rustle of leaves.

In this picture, everything is breathtaking and atmospheric. The gaze stubbornly clings to individual elements that line up in a solid, concise, but sensual image. And the last detail is a quick look at the title, prominent and capacious. As if Blok’s sacramental “Night. Street. Lamp. Pharmacy “, Levitan has a more comprehensive -” Autumn day. Sokolniki. “"