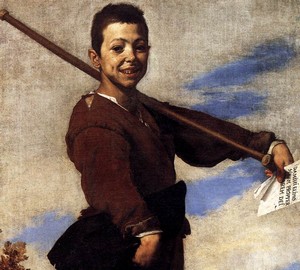 The representative of the realistic school of painting, the Spanish painter Hussep de Ribera painted religious paintings and portraits of immigrants.

One of these portraits was the painting “The Lamefoot”, depicting a lame small, poor beggar, whose name history has not preserved. Ribera chooses a low horizon and a low point of view, in which the viewer looks at the model from the bottom up. A similar composition is usually used in ceremonial portraits of representatives of the nobility, because it makes a figure for the sake of the eminent customer monumental, subordinating to it the whole place of the picture. This approach could play a cruel joke with the ill-fated lame-footed man, exposing his ugliness, but a real sincere smirk and the boy’s love for life read in it work wonders.

The image of a little stroller is full of attractiveness and childish spontaneity. Willing to believe that natural kindness and fortitude, fortified by years of suffering and deprivation, will not allow him to sink to the bottom of society in the future, and physical imperfection will not become a prerequisite for moral ugliness.

The painting was transferred to the Louvre in 1869."