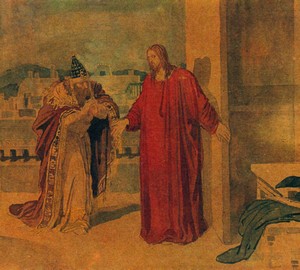 An outstanding painter, a representative of Russian classicism of the 19th century, Alexander Andreevich Ivanov lived a large part of his life in Italy. He works there, devotes a lot of time to spiritual development, ponders, makes sketches, draws paintings, landscapes, sketches on mythological and religious topics, is interested in icon painting.

During this period, his famous “Bible stories” arise. The cycle consists of more than two hundred watercolor sheets, as well as many drafts.

One of the best sketches – “Jesus and Nicodemus” – was executed in one thousand eight hundred and fifty-five year five on brown paper with watercolors and whitewash.

A recognizable biblical story about how the teachings of Christ affected the soul of Nicodemus, a very educated person for his own time, one of the Jewish leaders. The Messiah explains the meaning of baptism, says about a new spiritual rebirth, that without changing yourself you cannot enter the kingdom of heaven. Nicodemus is struck by what he heard, he reveals to himself ordinary truths, and, in the end, he becomes a follower and disciple of Christ.

The picture shows the moment when Nicodemus just arrived, he appeared secretly, his pose is artificially pleasing, he wants to attract this person to himself, whom many people say in the town. Jesus is open to conversation, this is evidenced by a hand extended palm up.

Brown paper is the main background; the center is the Messiah in reddish vestments. You can simply imagine how amazingly this sketch looked in the mural on the wall.

And Ivanov thought globally – he dreamed that according to his sketches the walls of some public structure would be painted, not a temple or a church. But his idea did not materialize and the outline remained, in general, little-known, although, according to art professionals, many of them are simply unique artwork in its own semantic content and execution.

The artist’s approach to storytelling is fascinating and unusual – he seeks to depict biblical images not as canonical saints, as historical heroes, real, but highly spiritual."